The twists and turns of the cycle

We introduce an indicator that captures economic and financial market dynamics in the US across different phases of the business cycle. This information is useful for making investment decisions.

Every investor we speak to highlights a range of preferred indicators that might tell us something about where we are in the cycle. Those who are bullish highlight that spare capacity – as measured by the unemployment rate and hours worked – remains, and so the cycle has further to run; or that mobility isn’t particularly high just yet and so could continue to rise. Those who are bearish look at how flat the yield curve is, or that a variety of housing metrics, which were previously showing strong momentum, are now weakening, although they remain at elevated levels. So, who’s right? They both are, as these pieces of information may be valuable. But they’re both incomplete, as all indicators should be tested to check whether they’re useful to track the business cycle.

We’ve built an Investment Cycle Indicator (ICI) that captures the main phases of the US business cycle (figure 1). The ICI tells us whether the cycle is ‘good’ and getting better (expansion), ‘good’ and getting worse (late cycle), ‘bad’ and getting worse (recession) or ‘bad’ and getting better (recovery). This indicator looks at the cycle from the perspective of an investor. It’s not about tracking GDP or another lagging economic variable, but about using only indicators available at the time of the model update, and which financial markets have historically associated with cyclical swings in the economy. Currently, the ICI points to expansion – though only slightly so. In the past, this phase has been associated with an outperformance of riskier assets, such as equities, over safer government bonds.

It would be great to be clairvoyant 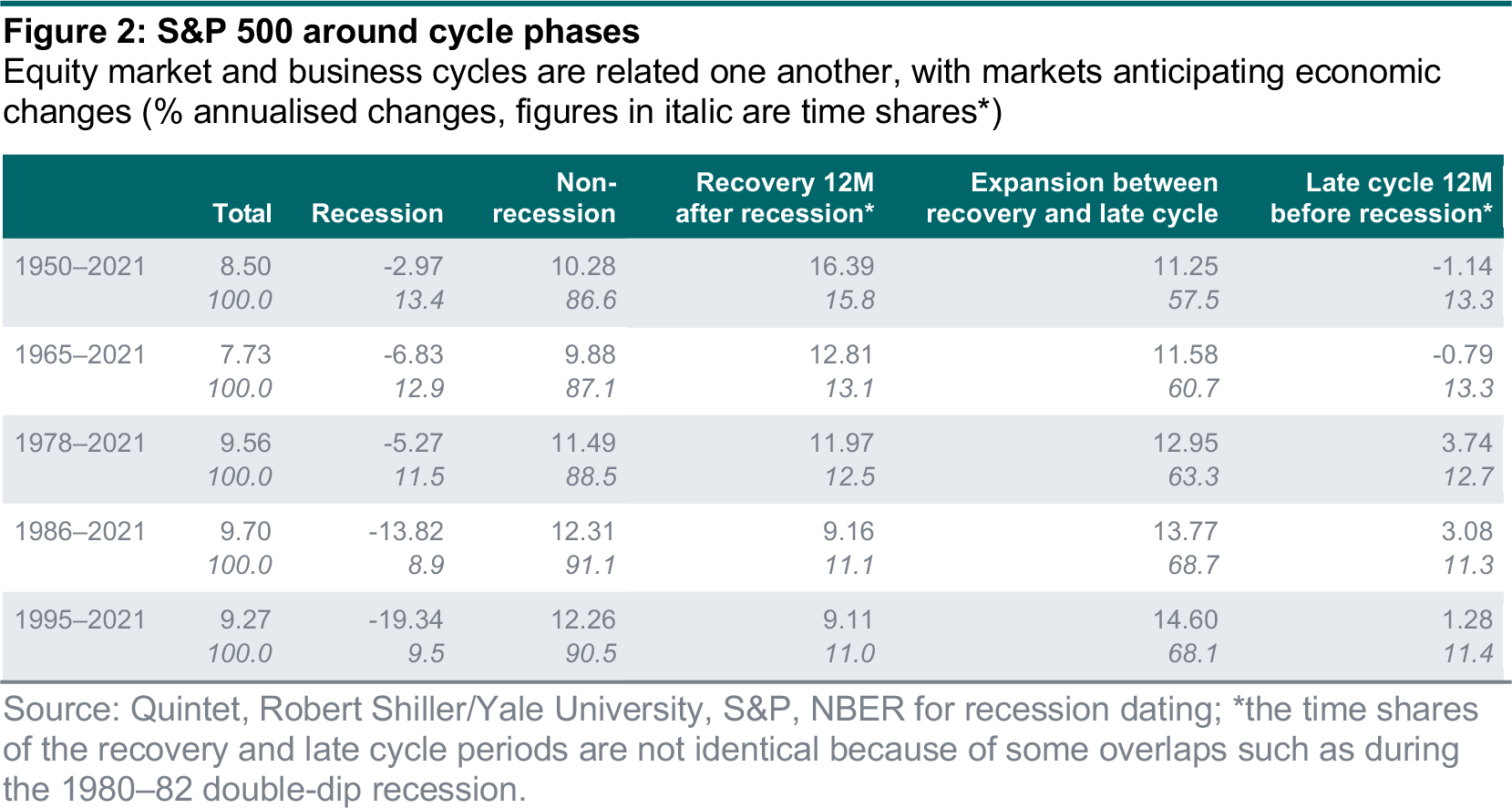 As an illustration, taking the recession dating of the National Bureau of Economic Research (NBER), a ‘clairvoyant’ investor who anticipates recessions 12 months ahead would have improved the performance of a 60/40 equity/bond benchmark portfolio by achieving overall higher returns at lower levels of volatility, positive returns in three of the four last downturns, and reducing the drawdown in 2000–02. The only exception we could find since the mid-1980s is the 1987 bear market (figure 3). An investor who avoids recessions but fails to anticipate them would still have outperformed the benchmark. In reality, it’s hard to spot the turning point in the cycle. The motivation to build a cycle indicator is to put a framework around our data analysis to inform investment decisions. 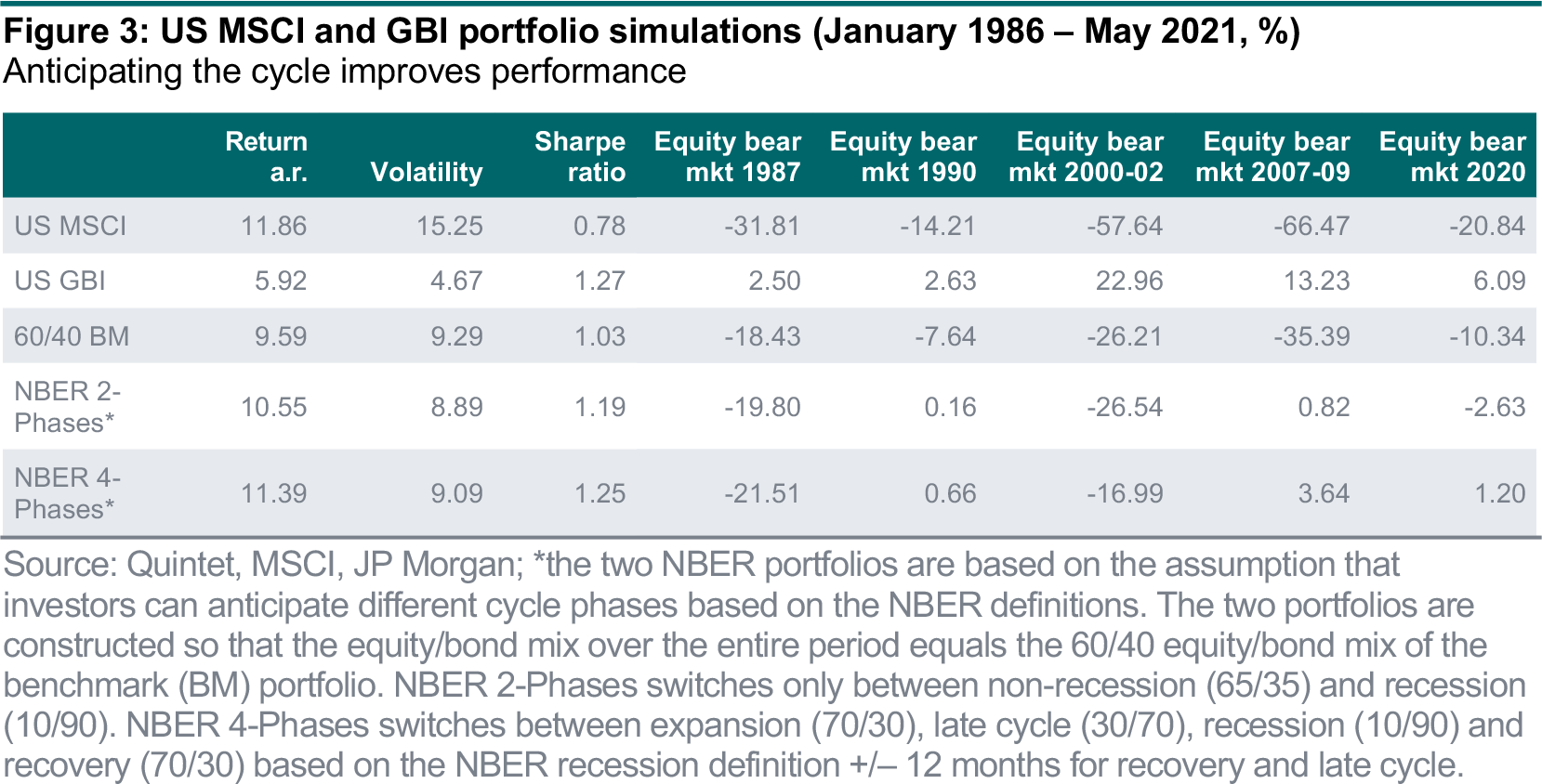 The ICI is inspired by research on leading indicators and cycle analysis. It uses various indicators that capture the broader cyclical dynamics of the business sector but that, at the same time, don’t display too much inner-cycle volatility or have insufficient history. Moreover, the ICI must qualify as a real-time indicator: while the possibility of revisions of the underlying data cannot be completely avoided, any further ex-post adjustments that create a foresight bias are ruled out. We’ve selected 11 variables out of a pool of 34 (figure 4), standardised and aggregated using equal weights (basically, combined using a z-score methodology).

We’ve also looked at different key leading indicators, but the results have proven unstable. This is because we’re not tracking a reference indicator such as GDP, in which case certain indicators would have more explanatory power than others. Rather, we’re interested in inflection points in a broad range of indicators, also reflecting how financial markets would look at them: risk-taking should increase when things are ‘good’ and decrease when they’re ‘bad’, based on a well-known recession dating. Each component enters the overall index with its actual release lag (basically, the index at any month contains only the data available at that time) to ensure ‘real-time’ properties.

The aggregated index is divided into four phases using a momentum measure (3-month average minus 12-month average) and starts in 1978:

The ICI captures US business cycle dynamics well with the typical sequential cycle pattern (figure 1, front page). There are no inner-cycle swings between recession and expansion. There are some variations between expansion and late cycle but every recession is consistently preceded by a late cycle period of about 12 months. Recessions overlap with the NBER definitions, but some last somewhat longer. 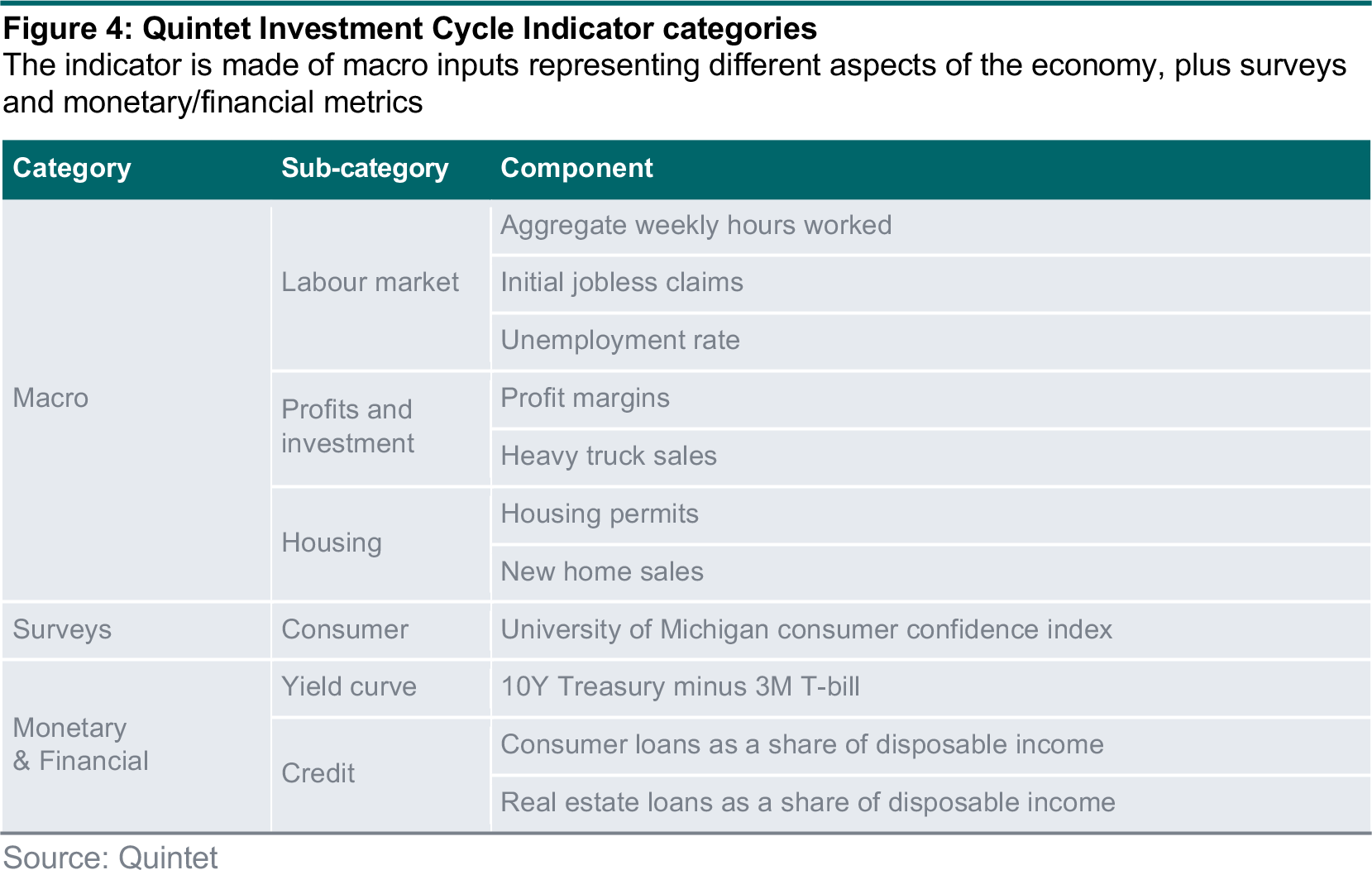 Figure 5 is a snapshot of the current position of the ICI components. The labour market indicators we include respond rapidly to changing conditions, such as hours worked; or reflect potential changes early on, such as initial jobless claims; or represent measures of resource utilisation and capacity constraints, such as the unemployment rate (figure 6). Measures of profits and investment, from corporate margins to heavy truck sales, are rapidly responsive too (figure 7). All these indicators are either in expansion or recovery. The housing market punches above its weight as it tends to have large supply chains, and includes a mix of early-stage indicators such as housing permits and rapid-response ones such a new home sales. They’re currently in late cycle – we think this is a temporary moderation after the 2020 surge.

Some indicators are survey-based, and so timely and expectation-sensitive, such as consumer confidence, which is in recovery too – this is important as household consumption is a large share of the economy. Finally, we use a range of monetary and financial indicators, such as the yield curve to capture the transmission of monetary policy, plus consumer credit and mortgages as a share of disposable income as changes in leverage are typically associated with booms and busts. While these indicators – which are still in recession mode – have proved valuable in past cycles, this time around monetary and fiscal policies may have distorted them. The ICI is currently in expansion mode – though only slightly. Our analysis of its components suggests that it may rise further. 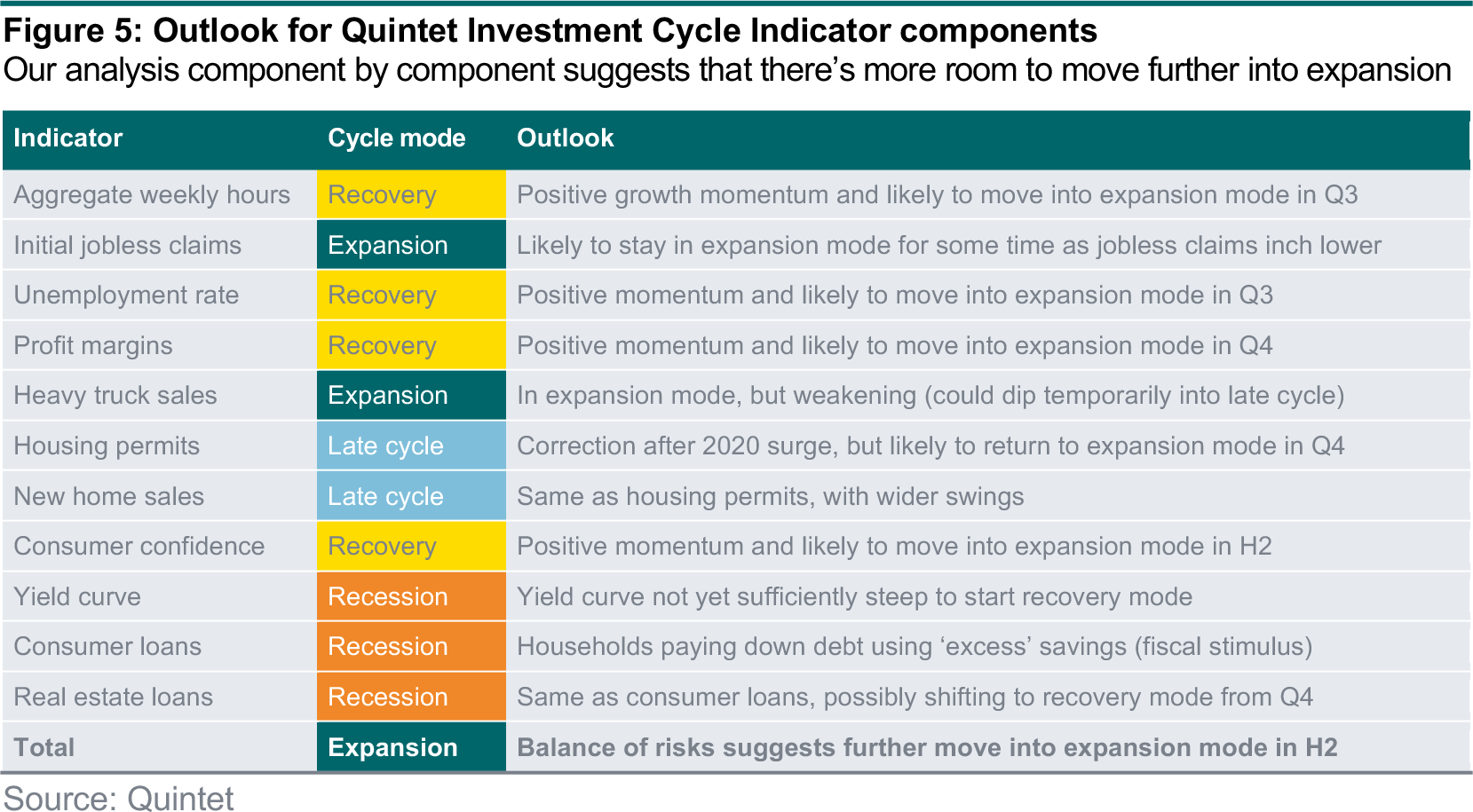 The ICI includes several other indicators and not all of them are in expansion or recovery but very close to expansion. The context here is very important. Take those related to the housing market, from permits to new home sales (figure 8). At face value, they’re in late cycle: they’re high and above average, but coming down. We regard this as a correction after the surge during the pandemic, partly related to the large policy impulse. Household loans as a share of disposable income, both consumer and real estate, are in recession mode too: they’re below average and coming down (figure 9). This too may have to do with policy, as the fiscal stimulus may have boosted ‘excess’ savings, which are now being used to pay down debt. We’d expect a pickup to recovery mode at some point towards the end of this year. 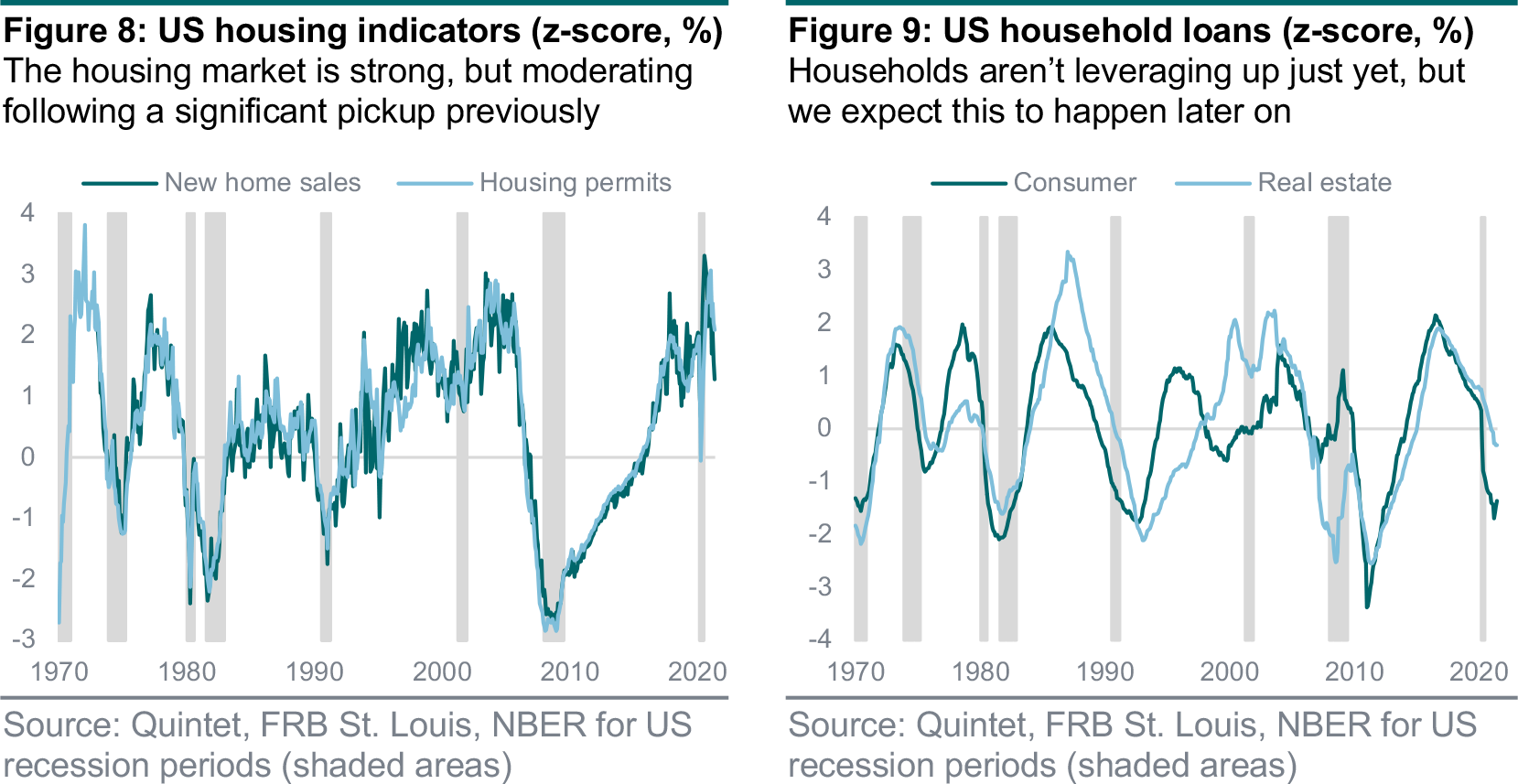 Importantly, we don’t apply our framework mechanically. We’re consistent with the calculations, but we also look at what’s driving the ICI by analysing the evolution of all the components. For example, consumer confidence is improving (apart from the last setback), but it’s not particularly high just yet (figure 10). We think better job prospects, increased mobility and higher vaccination rates should all be supportive. But the virus outbreak may have distorted this indicator. New variants may alter this picture, which is something we’re seeing at the margin in other indicators.

Similarly, the shape of the yield curve may have less signalling power, as it’s heavily impact by Fed policy (figure 11). But we still include it as a good proxy for one key aspect of financial conditions. 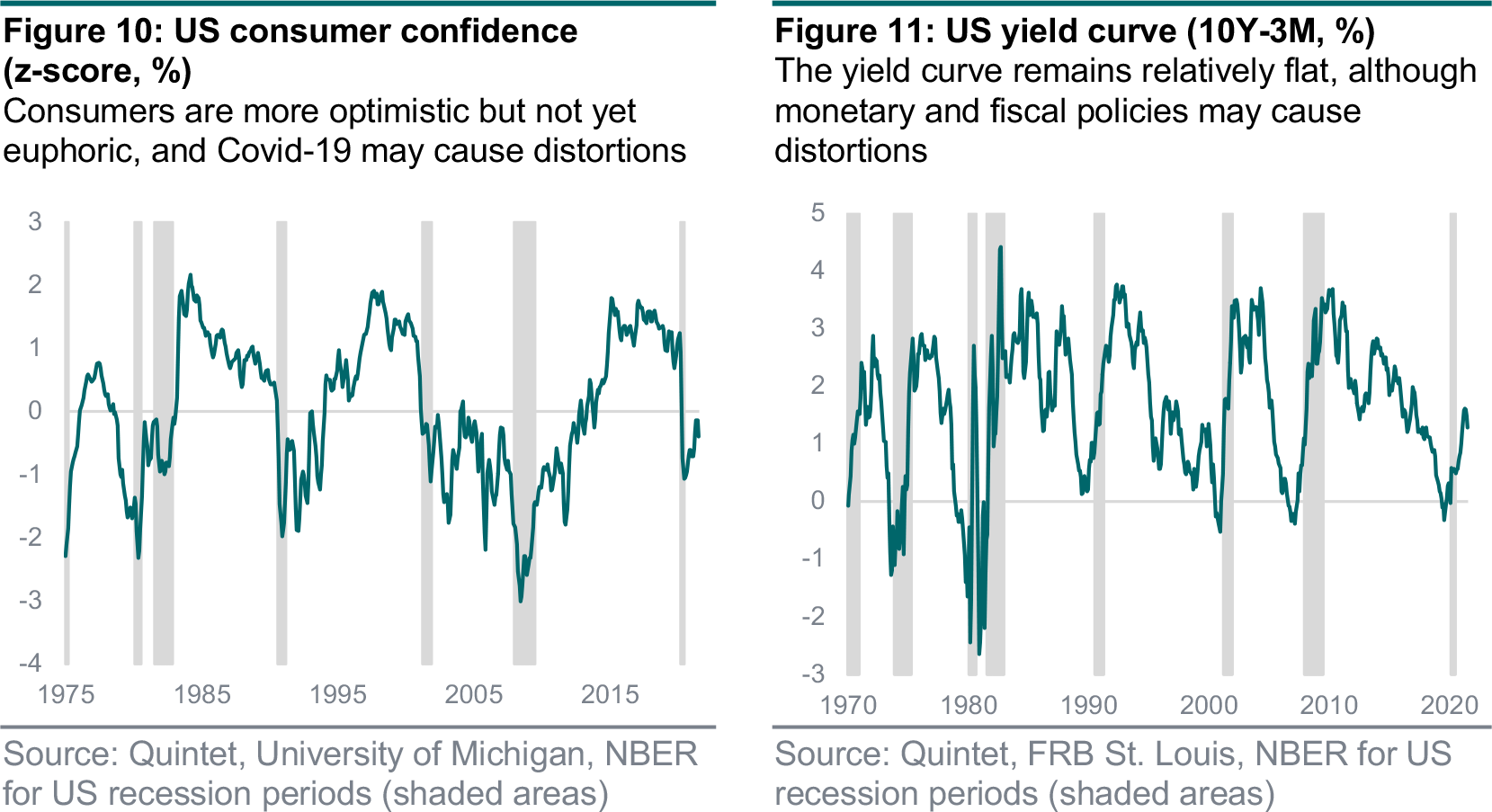 What has this meant historically for markets?

As before, we’ve tested whether this indicator is useful for investment decisions (in a historical context) by looking at the US equity market performance in different cycle phases, as well as the performance of an equity/bond portfolio (figures 12 and 13). In both cases, we’ve used only ICI data available at the time. Both ICI portfolios we test do improve the average return at a lower volatility and manage to reduce the drawdowns in equity bear markets. The unbalanced ICI portfolio has a very high Sharpe ratio and overcomes all equity bear markets almost unscathed but at the price of an overall lower equity allocation (on average just 51%). The ICI performance has a somewhat different pattern from the NBER-4 Phases portfolio but, overall, it produces a similar Sharpe ratio. 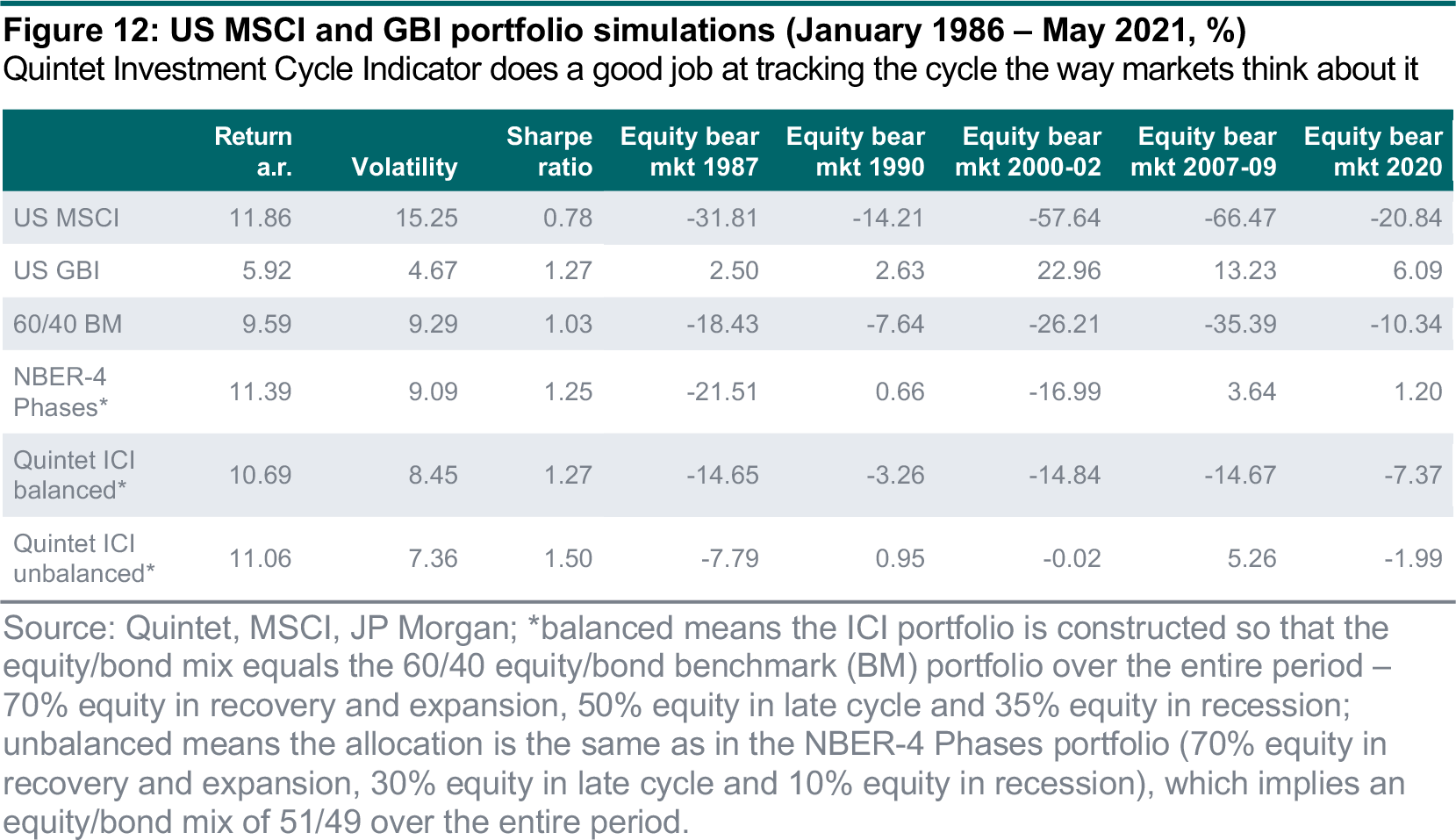 The current level of the ICI points to expansion – just. This is supportive of our US equity overweight, which depends on many other asset allocation considerations. The ICI has reached much higher levels in past cycles, and our analysis of each and every component suggests that, barring any unforeseen shock, there’s room to rise further, supporting our risk-on stance. Our indicator has suffered slight setbacks, possibly related to Delta variant concerns (though so far not much of an impact) and/or supply disruptions. These setbacks seem transitory to us. They haven’t yet been substantial enough to shift the indicator into a weaker cycle mode – although they’ve surprised consensus forecasts to the downside. We’ll use the ICI to continue to monitor the dataflow.

This document has been prepared by Quintet Private Bank (Europe) S.A. The statements and views expressed in this document – based upon information from sources believed to be reliable – are those of Quintet Private Bank (Europe) S.A. as of 19 July 2021, and are subject to change. This document is of a general nature and does not constitute legal, accounting, tax or investment advice. All investors should keep in mind that past performance is no indication of future performance, and that the value of investments may go up or down. Changes in exchange rates may also cause the value of underlying investments to go up or down.