How should investors think about the price of gold following the pickup in real yields? What’s the outlook for oil versus metals such as copper now that economies are reopening?

More than a year into the pandemic, investors are probably used to wild swings in the economy and financial markets. But, unlike past cycles, things moved faster and to a greater extent over the past 12 months. The key reason is that, to contain the virus spread, activity was shut down by government decree. At the same time, massive doses of monetary and fiscal stimulus were injected globally. Now that vaccine rollouts are ramping up and reopening is happening while the policy backstop remains in place, we’re seeing equally large bouncebacks in economic data and cyclical assets.

The risk-aversion phase of the pandemic resulted in a sharp increase in gold prices, which was boosted by a lower opportunity cost of holding the precious metal, as nominal and real bond yields fell. The price of copper picked up even more, reflecting rising demand for technological gadgets as consumers were stuck at home. While these dynamics have partly reversed for gold as yields have risen from record-low levels, copper prices have continued to surge – pushing the copper/gold price ratio even higher (figure 1). What’s likely to happen going forward, given the macro outlook?

We have refreshed our models for the price of gold and built comparable ones for the price of copper (figures 2 and 3). In essence, we estimate fair value by running statistical tests on a range of potential drivers to establish how well they perform – mostly as standalone relationships but also using large-scale econometric frameworks where available and appropriate (such as the one provided by the World Gold Council, to capture a range of demand and supply dynamics including those related to industrial uses). We then average out the price of these commodities implied by our models, with the weights representing how well they fit the data, along with their minimum and maximum to provide a sense of different possible outcomes depending on specific assumptions. 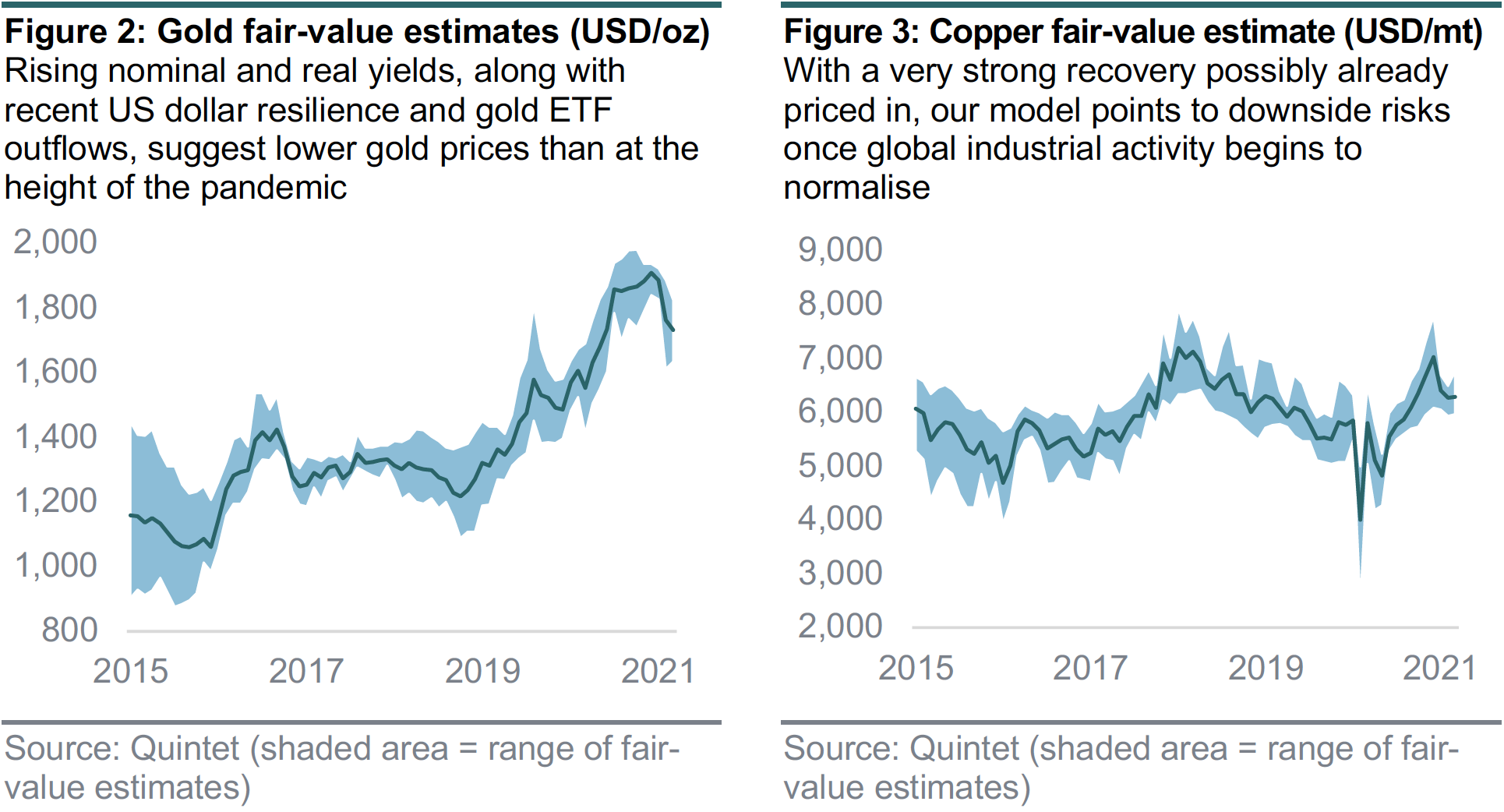 Our estimates suggest that the price of gold – at about 1,750 USD/oz – is fairly valued relative to fundamentals such as real yields, the US dollar and the share of negative-yielding debt to capture the opportunity cost of holding competing assets, plus gold ETF holdings to capture factors such as risk, uncertainty and short-term flows (figure 4). We cross-check these results against a wider battery of models, including inputs such as physical demand/supply. These other drivers do improve the robustness of the statistical relationship when combined with real yields, but not so much on their own and are difficult to project into the future. Our estimates also suggest that copper prices are overshooting fundamentals such as copper supply and various proxies for industrial production, along with exchange rate fluctuations (figure 5).

The drivers of gold: what’s changed? A real yield story

Let’s look at the main drivers of gold prices and how they’ve changed recently. The most important shift is that real yields, which are still in negative territory, have risen from the pandemic lows. This is by far the most important explanatory variable for gold and, in different specifications, features in all our models. The increase in real yields from the lows reflects expectations of stronger growth as economies reopen and, for a period of time, activity runs at a very strong pace before normalising once supply bottlenecks ease and pent-up savings are spent. Rising real yields are likely to remain a headwind for the price of gold going forward, in our view (figure 6). However, while overshoots are possible, at this juncture their level doesn’t suggest any further downside to gold from a valuation perspective.

Other drivers paint a similar picture. For example, the share of negative-yielding debt has now declined (given rising bond yields) (figure 7). That said, these other metrics too don’t point to extra downside. Rather, they basically indicate that gold prices seem more or less fairly valued according to these fundamentals, nothing more but nothing less either. Other important drivers are just a moderate headwind, such as the fact that the US dollar is no longer weakening (but not strengthening much either). Shifts in physical demand/supply and fast growth in money supply are supportive, but they’ve either improved marginally (physical factors) or don’t fit the data that well (money supply), while ETF holdings – which are key from a short-term perspective – have continued to decline recently (figure 8). 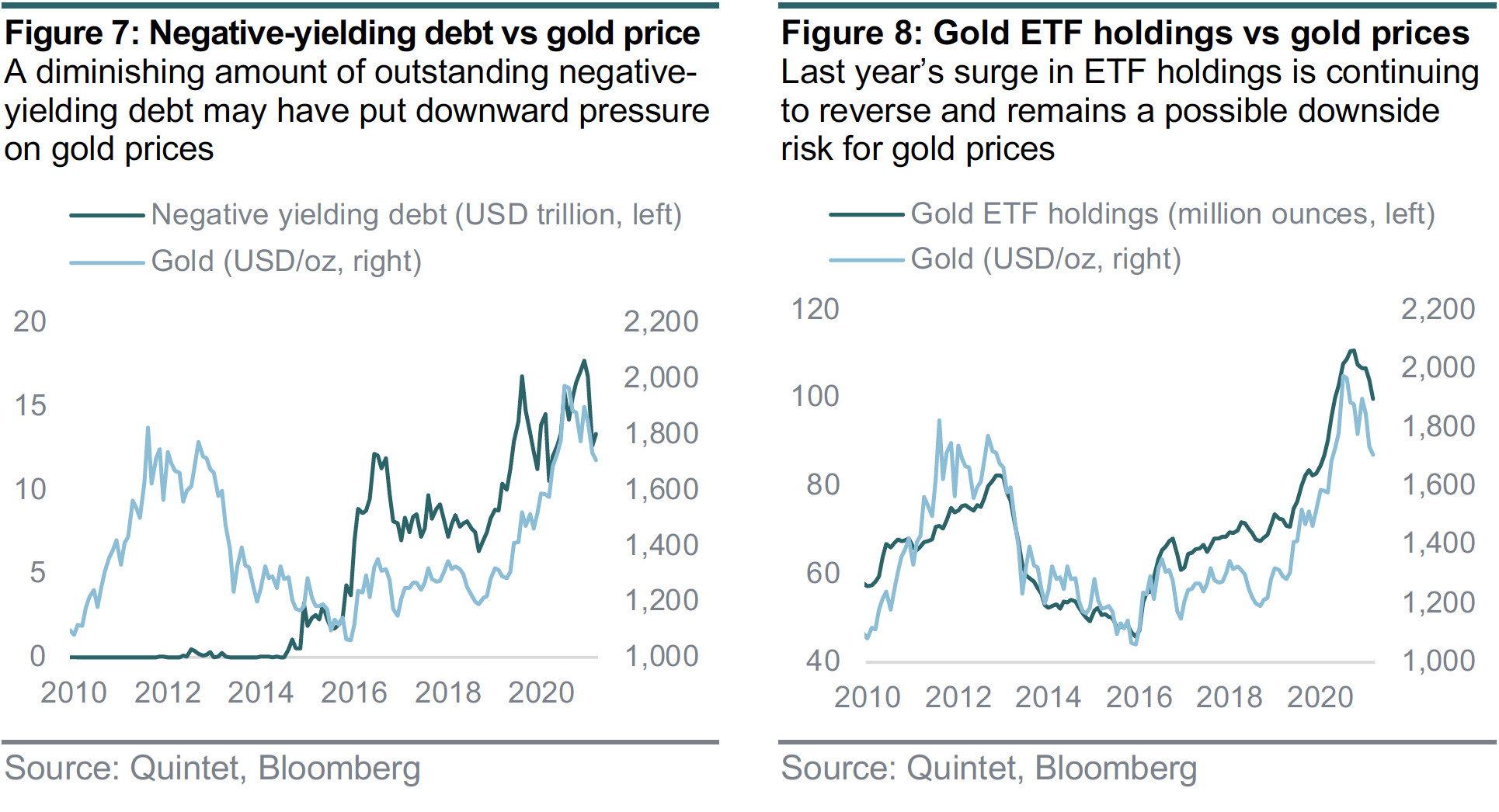 The drivers of copper: what’s changed? A tale of demand overshoot

The main drivers of copper are more ‘physical’ in nature. Our models are mainly based on proxies for global demand – ranging from industrial production calibrated using our GDP numbers (figure 9) to combinations of the purchasing managers’ indices for manufacturing in China (by far the largest source of demand) and the US (figure 10) – and refined copper supply. The US dollar is included in some of our models. But financial variables appear to matter less for copper than for gold (and exchange rates haven’t moved that much anyway recently). Similarly, we do look at physical demand/supply for gold (see Counterpoint Weekly 14–20 December 2020, ‘Good as gold’), but it appears to matter less than for copper, and in any case it has changed marginally lately. 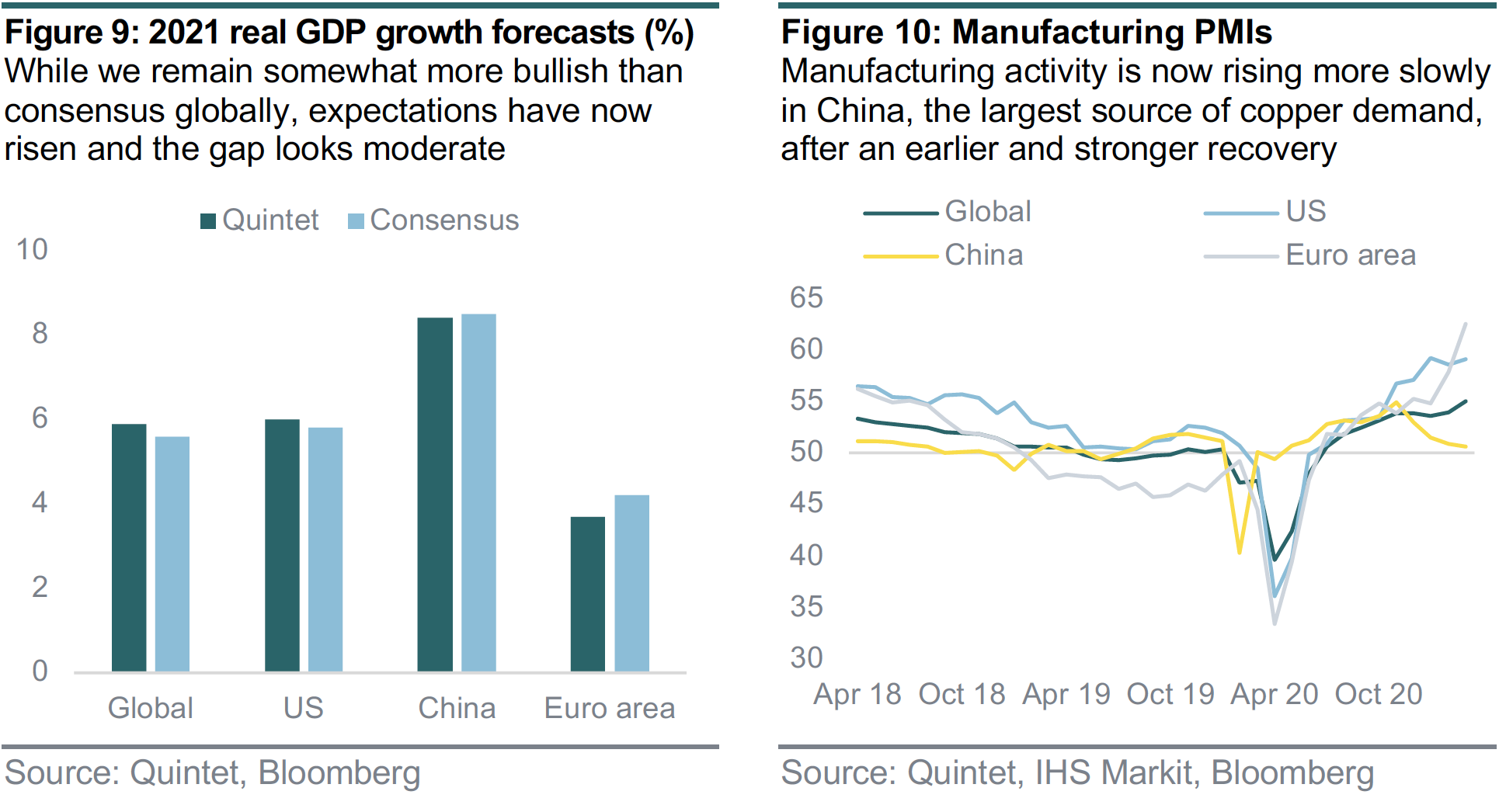 One key takeaway from our econometric exercises is that copper prices appear to have risen over and beyond the model predictions, especially considering that China manufacturing is expanding less briskly. One explanation could be that a lot of the anticipated bullish news has already been priced in (consensus forecasts for global growth have risen). So copper won’t likely continue to trend higher, even if it may be slow to fall. As reopening progresses and vaccine rollouts boost mobility, the likely normalisation in services will be one of the key drivers of activity. This should imply a rotation from buying metals-intensive, working-from-home electronics, kitchen appliances and gym equipment to spending money on oil-heavy travel, favouring energy commodities at the expense of metals in the short term (figure 11).

Our analysis supports the following conclusions and forecast changes:

The price of gold looks fairly valued. An update of a selection of our econometric models suggests that the decline in gold prices has been primarily driven by a faster-than-expected rise in real yields – given the sharp pickup in growth expectations in the US. Even though the opportunity cost of holding competing assets has declined to some degree and will probably continue to do so, remaining a headwind going forward, at this juncture we believe that gold is close to its fair value of 1,750 USD/oz, give or take. From a valuation perspective, we don’t see much downside from current levels.

We have recalibrated our gold price forecast. Short-term drivers, including gold ETF holdings, remain a drag for now. Physical demand/supply has improved marginally. The US dollar appears to be a lesser driver. Bond yields should rise further, though we think the bulk of the near-term adjustment is behind us. Given this backdrop, we now expect the price of gold to end 2021 at about 1,800 USD/oz and to rise marginally to 1,850 USD/oz in 2022–23.

The price of copper looks higher than fundamentals would suggest. Fair-value estimates for copper look somewhat more unstable than for gold and, while our models fit the trend reasonably well, they don’t capture short-term price fluctuations particularly well either. These caveats aside, our econometric work suggests that no single demand/supply factor can explain such elevated prices. One possibility is that the lockdown has probably boosted demand for home appliances and electronics, in turn boosting copper demand. At least some of this demand, therefore, is transitory.

We launch copper price forecasts. It’s not obvious that momentum in copper prices will reverse quickly. Our survey of statistical models suggests that about 70% of the misalignment versus fair value tends to self-correct within six months. But, assuming structural change over the years, the discrepancy could last for longer. The ongoing shift towards greener technologies, for example, could be a supportive long-term factor. We forecast copper prices to average 8,800 USD/mt at end- 2021, before moving lower to end 2022 at 8,000 USD/mt and falling again in 2023 (7,700 USD/mt).

We believe energy has more upside than metals. Some of the base metals may give back gains over the course of this year, though moderately. Conversely, oil demand – half of which is consumed by moving people and things around – should continue to normalise on the back of more effective vaccine rollouts and therefore, reopening and higher road fuel demand in the context of a tight crude market. We see Brent oil prices rising to an average of USD 75 per barrel at the end of this year (see Counterpoint Weekly 22–28 March 2021, ‘The inflation question’). Longer term, though, the transition towards greener technologies remains a key headwind for oil.

This document has been prepared by Quintet Private Bank (Europe) S.A. The statements and views expressed in this document – based upon information from sources believed to be reliable – are those of Quintet Private Bank (Europe) S.A. as of 19 April 2021, and are subject to change. This document is of a general nature and does not constitute legal, accounting, tax or investment advice. All investors should keep in mind that past performance is no indication of future performance, and that the value of investments may go up or down. Changes in exchange rates may also cause the value of underlying investments to go up or down.