With Democratic nominee Joe Biden set to assume the US presidency in January, many supporters of sustainable investing and climate action have rejoiced. Biden has pledged to bring the US back into the Paris Agreement, rejoining almost 200 other countries. He has also outlined an ambitious green investment agenda that aims for the US to achieve a 100% clean energy economy and reach net-zero emissions no later than 2050. While this seems the direction of travel, how much he’ll be able to achieve – and how fast – will depend on how a likely ‘divided blue’ government manages to muster broader congressional support.

Companies aligned to a sustainable future and sustainable investing as an investment discipline are likely to benefit. Having previously explored Quintet’s sustainable investing approach in our Counterpoint Weekly, 4 May 2020, we take the timely opportunity to outline a simple, yet effective, lifestyle and investment framework in pursuit of climate neutrality. Our work highlights investment opportunities in low-carbon equities and green bonds, as well as the value of verified emission certificates.

As individuals, in terms of lifestyle, major CO2 contributions include our choice of ground transportation, propensity to utilize air travel and dietary habits.

From an investment perspective we can measure the carbon emissions from corporations and then compute an investors’ share of, or ‘responsibility’ for, them. Figures depend on the breadth of activities examined and are categorised with ‘scopes’ by the GHG Protocol Corporate Standard.

Scope 1 emissions are emissions from sources owned or controlled by the company, typically direct combustion of fuel in a furnace or vehicle. Scope 2 emissions are broader and include those caused by the generation of electricity purchased by the company. Scope 3 emissions are broader still and include an array of indirect emissions from activities such as business travel, distribution of products by third parties, and downstream use of a company's products (i.e. by customers and ‘end-of-life’/disposal activities). The investment industry often utilizes Scope 1 and Scope 2 for its analysis.

Low-emission investment strategies draw on these methodologies and can be either unconstrained or optimized. Unconstrained strategies underweight high-emission industries without regard for the resulting sector and style biases. They posit that high-emission industries will underperform low-emission industries. Optimized strategies use quantitative techniques to limit sector and style biases, ensuring that a low-emission strategy can deliver comparable returns to conventional strategies while being “responsible” for significantly lower emissions. The popular MSCI Low Carbon Target family of indexes follows an optimized approach and has, historically, consistently delivered comparable returns to conventional strategies with a 60% reduction in Scope 1 and 2 CO2 emissions (figures 2 and 3).

The path to climate neutrality requires our society and economy to transform. It’s essential to innovate with new sources of energy, fund new technologies and re-engineer supply chains through a circular economy.

As individuals, in terms of lifestyle, we can transform our economy through our choice of domestic energy source, our adoption of travel alternatives, such as video conferences, and support for business strategies, such as remote working.

From an investment perspective, we can fund transformative projects and technologies that are facilitating a low-emission future. Potential investments span the asset class spectrum, from venture capital to private equity and debt, as well as public markets.

Within the public markets, green bonds are an effective and transparent dedicated asset to finance transformation (figure 4). Green bonds are debt instruments where the proceeds are exclusively used to fund green projects. Each entity issuing a green bond produces a report detailing how the money is spent and what solutions and impacts are. According to the climate bond initiative, the current size of the green bond market is almost USD1 trillion.

At Quintet, we believe that the green bond market is now deep enough to run a full investment grade credit portfolio, with suitable diversification across sectors and tenors. This is an important step in mainstreaming sustainable investing. 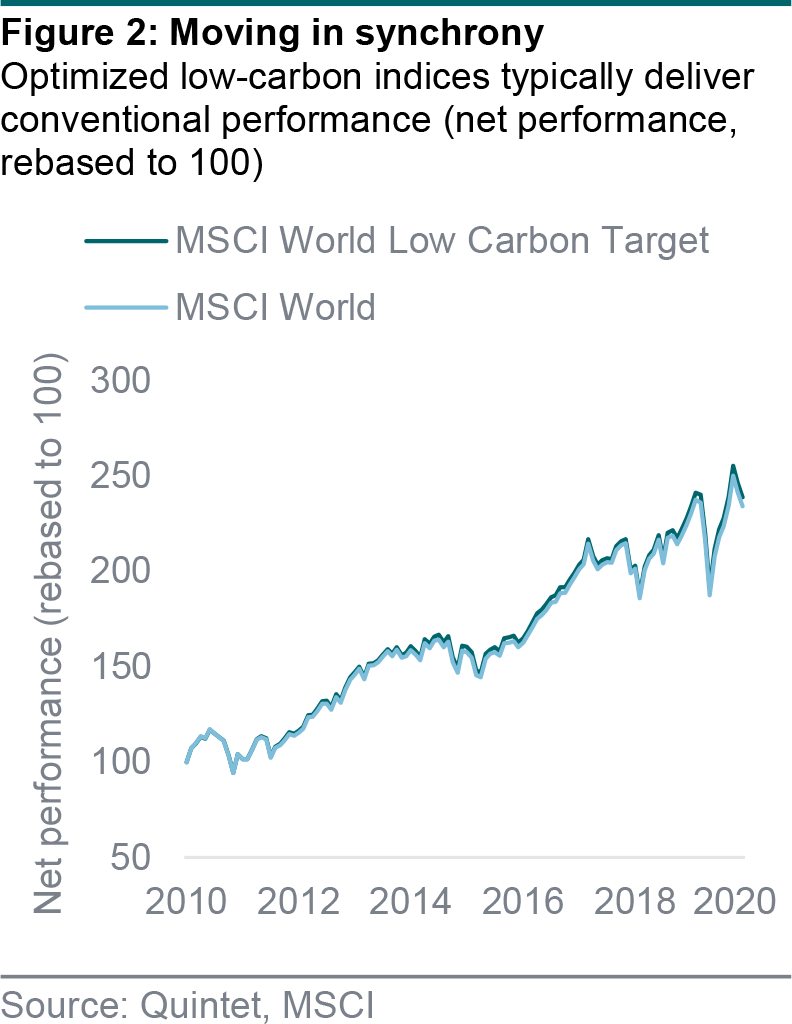 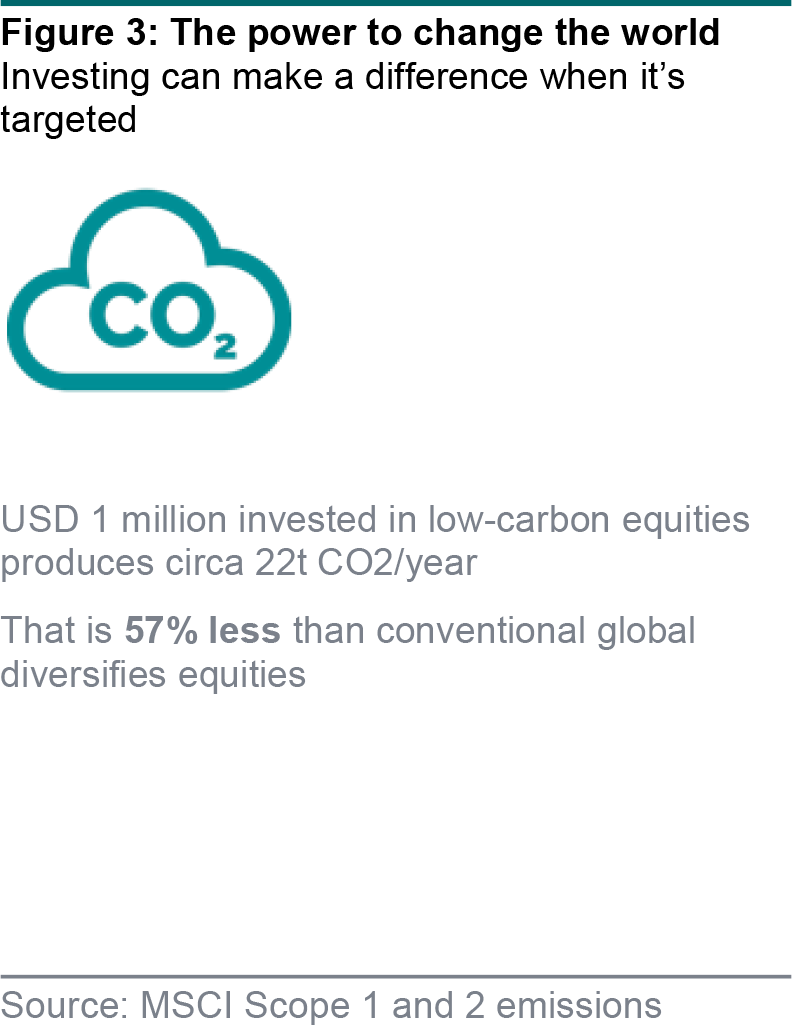 The emerging frontier in pursuit of climate neutrality is carbon removal. For individuals, the most accessible carbon removal technology is tree growing. During photosynthesis, trees absorb CO2 from the atmosphere, and use it to build new materials – such as trunks, stems and roots. Academic work suggests forests currently store as much as 45% of all land carbon.

From an investment perspective a range of opportunities exist, predominantly in the private markets. They include carbon capture and storage (CCS), which seeks to capture carbon from large point sources, such as a cement factory or biomass power station, to the emerging direct air capture (DAC) technology that seeks to “suck” carbon out of ambient air.

At present the most scalable removal techniques are voluntary emission reductions (VERs), commonly called carbon credits. VERs represent a ton of carbon that is either removed from the atmosphere – for example, by tree planting – or avoided – for example, by funding more fuel-efficient wood-burning stoves. VERs operate within a robust system of project development and specification, independent verification and certification.

According to Forest Trends, the size of the VER market is more than USD320 million a year. University of Oxford research has strongly endorsed VERs that evidence additionality – removals that would not have occurred without the purchase of the VER – instead of VERs that rely on carbon avoided metrics and counterfactual analysis – such as funding stoves or paying to prevent or slow deforestation.

We believe using credible VERs is a valuable part of a climate neutral strategy.

We believe the investment industry has a large role to play in funding the firms and technologies that will reduce, transform and remove. With Democratic nominee Joe Biden seemingly set to assume the US presidency, sustainability and sustainable investing should receive another welcome boost.

Real GDP growth surprised to the upside in the third quarter, both in the US and Europe. However, the near-term growth outlook has deteriorated sharply – mostly across Europe but also, to a much lesser extent, in the US – for two reasons.

First, the number of Covid-19 cases has continued to surge and hospitalisations have started to rise notably in recent days – even though they remain lower than earlier in the year. Second, most European countries have announced renewed, but more partial, lockdowns in November.

The evidence during the first wave points to a negative relationship between the containment measures and economic activity. Using the same mapping, the latest partial lockdowns would imply a real GDP contraction in the low-single digit range in the euro area and the UK, and positive but slower growth in the US in the fourth quarter and likely the first quarter of next year.

That said, we think the impact will probably be smaller this time around. In part, this is because the more stringent measures are about restricting gatherings of large numbers of people for non-essential activities – for example, in restaurants. These restrictions are why table reservations have collapsed in Germany and the UK, and have recently stopped rising in the US (figure 5).

Conversely, extra restrictions on mobility – which strongly correlates with economic activity – don’t seem to have had the same, very strong effect, possibly due to better adaptability (figure 6). Here too the decline in mobility is more pronounced in the euro area and the UK than in the US – but it’s not as sharp as it used to be under the full lockdowns in the spring. 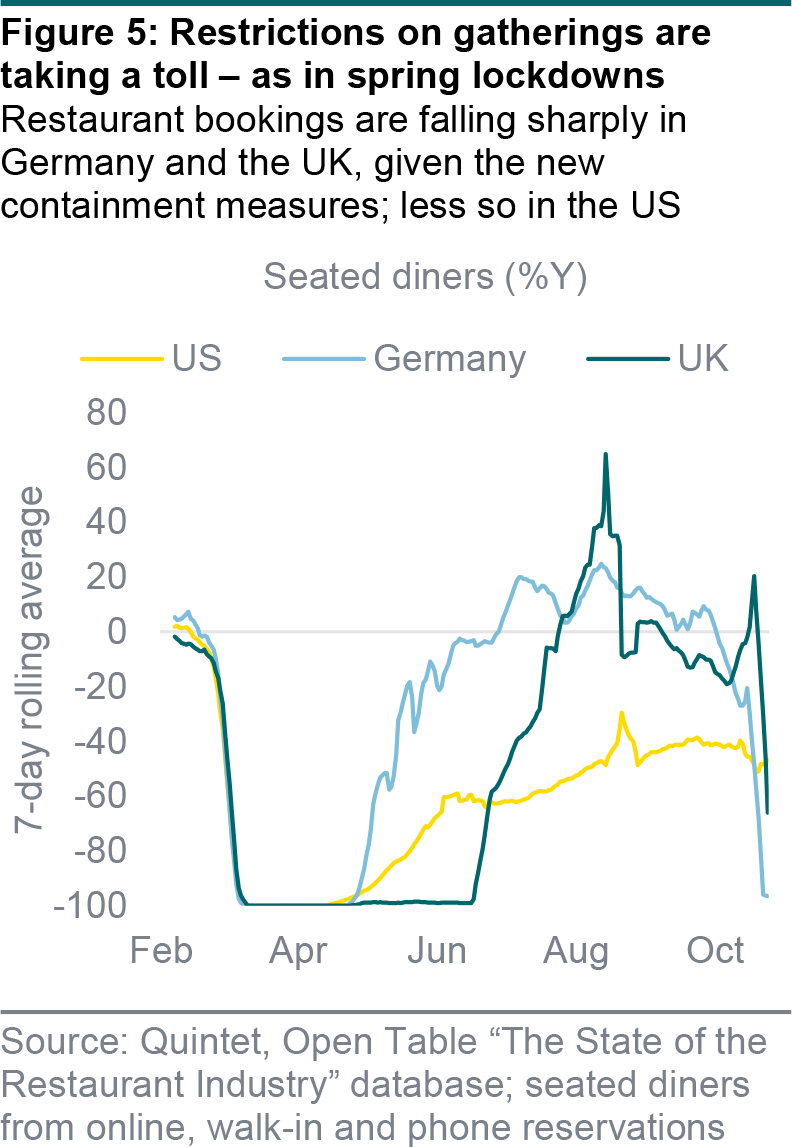 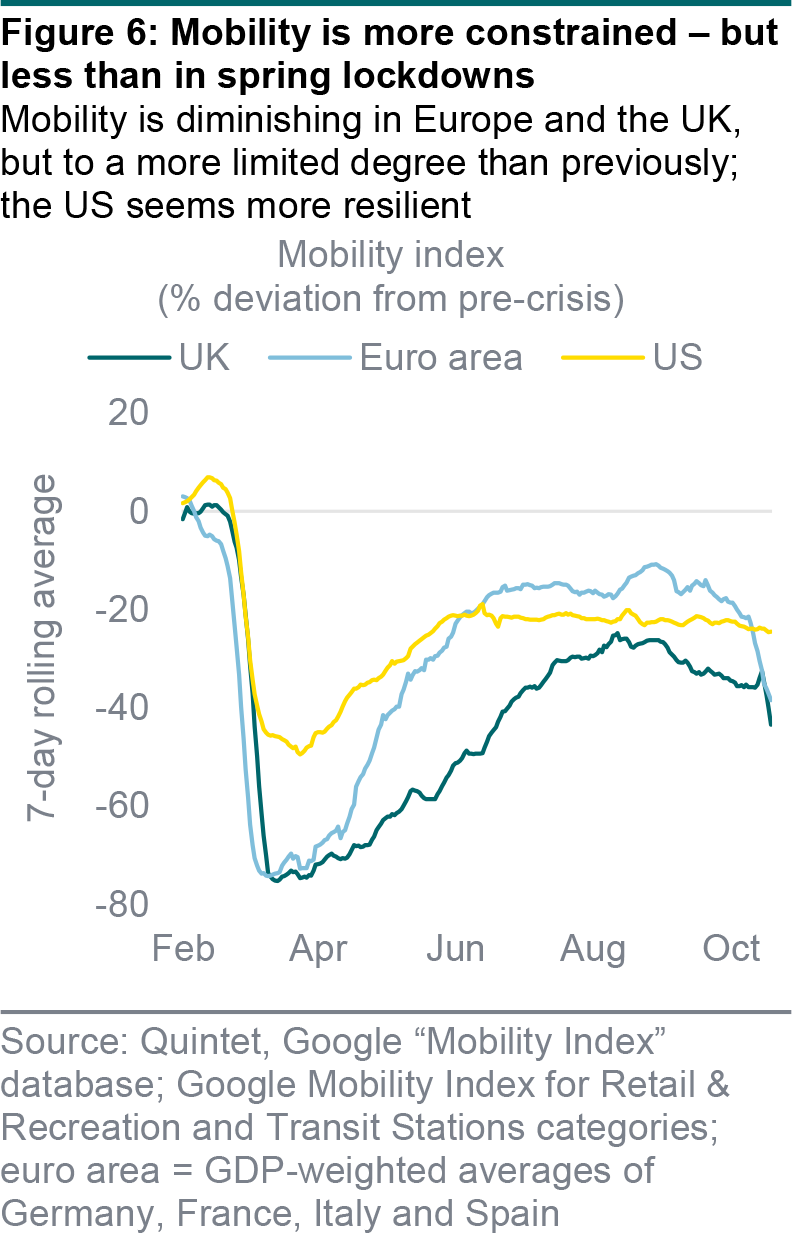 This document has been prepared by Quintet Private Bank (Europe) S.A. The statements and views expressed in this document – based upon information from sources believed to be reliable – are those of Quintet Private Bank (Europe) S.A. as of November 16, 2020, and are subject to change. This document is of a general nature and does not constitute legal, accounting, tax or investment advice. All investors should keep in mind that past performance is no indication of future performance, and that the value of investments may go up or down. Changes in exchange rates may also cause the value of underlying investments to go up or down.